From the beginning of the 1950s a large number of 16mm film projectors were used in smaller Hungarian settlements. Venues with a capacity of up to 150-200 people were able to utilize the 16 mm film projectors that, compared to the 35mm film projectors used in cinemas of higher capacity worldwide, required less raw material and were simpler and more portable. Screening was held on a weekly basis in cultural centers, and the “travelling cinema” network also used this technique. In the 1950s and 1960s, the aim of the cultural policy was to bring cinema to all Hungarian settlements, so the number of venues (e.g. in workers’ hostels, dormitories, barracks, and schools) using 16 mm film projectors was much higher than that of 35 mm cinemas. Although 16 mm film projectors are capable of projecting smaller images, and the black and white copies also made the experience slightly less amusing, the screenings were still extremely popular. BM2003, Meopta, Ukraine, AP-12 – we have put together an exhibition of the slowly forgotten technique in the gallery of Sub Rosa Café in honor of the 120-year-old Hungarian film. 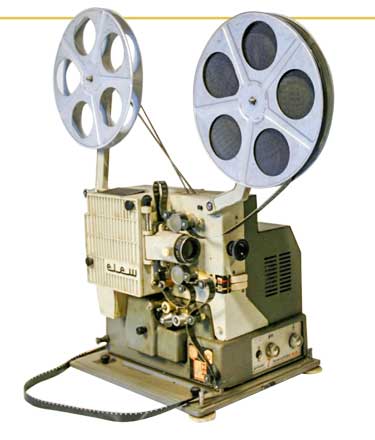 Kapcsolódó hír:
Exhibitions on the history of cinema (hír)