2019. September 17. Tuesday 08:06
Two new films by excellent directors: Agnieszka Holland and Bruno Dumont – that is the news for Tuesday at the CineFest! And of course a lot of other great movies as well. Let’s see the program for Tuesday!

As part of the CineDocs program at 3 PM in the Uránia room starts the Hi, A.I. –Love Stories from the Future. Isa Willinger’s film introduces us to the world of humanoid robots and A.I. in a masterfully composed and humorous way. While Chuck starts his romantic journey with his newly assembled robot partner, Harmony, in the U.S., in Tokyo grandma Sakurai gets a cute robot grandchild named Pepper from her son. Although our main characters are separated by a world, their goal is similar: they want company. After several international film festivals (e.g. HotDOCS, Sheffield Doc Fest), in Hungary, the audience of the CineFest will be the first to marvel at the life-changing role artificial intelligence can play in our lives.

At 4 PM in the Zukor room starts the repetition of System Crasher. It is the heartbreaking story of Benni, a nine-year-old girl. The wild, love-hungry girl is what child protection services call a ‘system crasher’. Despite every effort of the system and its experts, she is expelled from everywhere due to her disturbing behavior. She is considered dangerous on her environment and herself as well. Benni has one single goal: she wants to go home to her mommy who forsook her. The film that has been awarded at the Berlin International Film festival could be a true story: it talks about children who, despite all efforts, do not fit into the system. Helena Zengel’s thrilling and mature film will stay with us for a long time.

At 4 PM, in the Béke room, the repetition of a very exciting movie starts. In Monos on a faraway mountaintop somewhere in Latin America eight kids – Rambo, Smurf, Swede, Bigfoot, Wolf, Lady, Dog and Boom Boom – receive an order. They have to watch over a foreign hostage (Julianne Nicholson) and a conscripted milk cow. Because of the quick change of frontlines their once easy mission turns to a nightmare. Alejandro Landes’ (Porfirio, Cocalero) third feature evokes the time of the Columbian civil war from the teenagers point of view.

At 4 PM in the Pressburger room the repetition of Tehran: City of Love is screened. Mosaics from Tehran where everyone wants to find happiness. The receptionist fighting against kilos, the former bodybuilder and the accidental wedding musician share the same goal. They want to find The One. A great Iranian tragicomedy with an exceptional cast and witty humor.

At 5 PM in the Uránia room Diamantino is screened. The film premiered in Cannes and is screened as part of the Open Eye program. The soccer star and former Portuguese national hero, Diamantino loses his special touch and ends his career in disgrace. In reaction to a devastating World Cup loss he adopts a Mozambican refugee who claims to be a teen boy but is actually an undercover agent of the Portuguese government investigating the money-laundering operation run by the athlete’s evil twin sisters. There is also a mad scientist trying to clone Diamantino in order to create an invincible super team. And there are some giant fluffy dogs as well. Prepare yourself for one of the craziest political satire of the year!

The „Our Home – Miskolc” program is a CineFest tradition. The aim of the program is to bring the work of local artists into focus. Every year the organizers of the program look for new or already established talents to uncover stories from Miskolc and Borsod. This year the program offers real gems. Every year the CineFest offers a scholarship to one talented student of the University of Miskolc, Department of Cultural and Visual Anthropology to realize his/her film project. This year the grantee has been Eszter Mucsi. Her film ‘Goulashsushi’ premieres at 6 PM in the Béke room. It portrays 8 Hungarian artists who became successful thanks to their proficiency in Japanese art. What do Hungarians and Japanese people think about their work, and can we consider their art Japanese, or has it been “Hungarianized”? The screening is folowed by Q&A with the filmmaker.

Two years ago, one of the most influential French directors of our time, Bruno Dumont, presented his version of Joan of Arc’s childhood in the form of a heavy metal-musical. The film has premiered in Hungary at the CineFest. Joan of Arc, premiering at 6:15 PM in the Pressburger room follows the story of The Maid of Orléans in the Hundred Years’ War, up to the inquisitorial court and to the stake – this time in a more conservative way, in dialogues. Joan is played by 11 years old Lise Leplat Prudhomme, whose performance of Joan of Arc is one of the strongest in the history of cinema.

Academy Award-winning director, Asif Kapadia is well known for his investigative documentaries with which he works toward uncovering the absolute truth. After Senna and Amy, Kapadia turns to another legend: Diego Maradona. The extraordinary portrait, that is screened at 7:00 PM in the Zukor room, shows us everything: the moments of incredible determination, the highs and lows of being an international superstar, the life of the God of Napoli, his relationship with gangsters and the moments of his downfall.

At 7 PM short features are in focus in the Uránia room. The Fifth – and last – block of the Short Feature Competition Program, with Czech, French, Chinese-French, Spanish, Belgian, Dutch and British films.

The Open-Air Cinema at the Népkert is a joint program of the CineFest. Népkerti Vigadó és Söröző (Görgey Artúr út 23.) hosts the program. At 7:30 PM Free to Rock is screened. The film is directed by the four-times Emmy-winner Jim Brown and is narrated by Kiefer Sutherland. The filmmakers spent ten years with researching the social impacts of rock&roll behind the Iron Curtain between 1955 and 1991.

At 8 PM in the Béke room the repetition of the Slovenian Half Sisters starts. It is a comedy of dramatic depth about two sisters. For years they hated each other but fate introduces a U-turn and they have to live together in an apartment. By the end sisterly love overcomes every conflict.

At 9 PM in the Pressburger the Palestinian director, Elia Suleiman’s new film is showed. It Must Be Heaven has won Special Mention in Cannes. At the CineFest it is part of the feature competition program. The film’s hero is the director himself: Elia is fleeing from Palestine to search for a new home somewhere else. The problem is, he finds his homeland everywhere he goes. The promise of new life leads to comical mistakes: from Paris to New York unexpected parallels to Palestine exist. Multi-award winning Elia Suleiman made a humorous identity movie on belonging, asking the most important question: Where is the place we call our true home?

At 9:15 PM in the Zukor room we can watch another movie by Denis Côté. A Skin So Soft introduces us to the world of modern-day gladiators. The group includes high-level bodybuilders, a strongman and an ex-champion-turned-trainer. Asthey prepare for future competitions, they follow extreme diets and slave away at the gym. Each man pursues his own personal goals, but all share the same obsession: overcoming the limits of their bodies. The screening is followed by Q&A.

At 9:15 PM in the Uránia room the repetition of Prospect starts. A teenage girl (Sophie Thatcher) and her father (Jay Duplass) travel to a remote alien moon, aiming to strike it rich. They’ve secured a contract to harvest a large deposit of the elusive gems hidden in the depths of the moon’s toxic forest. But there are others roving the wilderness and the job quickly devolves into a fight to survive. Forced to contend not only with the forest’s other ruthless inhabitants but with her own father’s greed-addled judgment, the girl finds she must carve her own path to escape.

At 10 PM, the Béke room hosts the repetition of the Fourth block of the Short Feature Competition Program, with two Spanish, one French-Brazil, a Swiss-French, a Belgian, a British and a Dutch film.

At 11.15 PM in the Uránia room the former CineFest Lifetime Achievement Award winner Agnieszka Holland’s new film Mr. Jones is screened as part of the Open Eye program. In March 1933, Welsh journalist Gareth Jones takes a train from Moscow to Kharkov in the Ukraine to cover the Ukrainian „prosperity”. After getting rid of his shadow at a small train station he sets off on foot on a journey through the country where he experiences at first hand the horrors of famine and oppression. Everywhere there are dead people, and everywhere he goes he meets henchmen of the Soviet secret service looking for suspicious people. They have strict orders to prevent news about the truth from getting out to the general public.

At 11:15 PM in the Pressburger room the repetition of Léo Major – The One-Eyed Ghost from the CineDocs category starts. Léo Major was the Québécois Rambo. During a reconnaissance mission on D-Day, he captured a German armored vehicle by himself. Later on, he single-handedly captured 93 German soldiers during the Battle of Scheldt. He has been wounded and ordered back to Canada two times, but he escaped the hospital both times and went back to fight instead. With some help from the Dutch Resistance, Major liberated the town of Zwolle where an avenue is dedicated to him. In the Korean War, he and his 18 men captured Hil 355 and held the enemy (14.000 Chinese soldiers) off throughout the night. 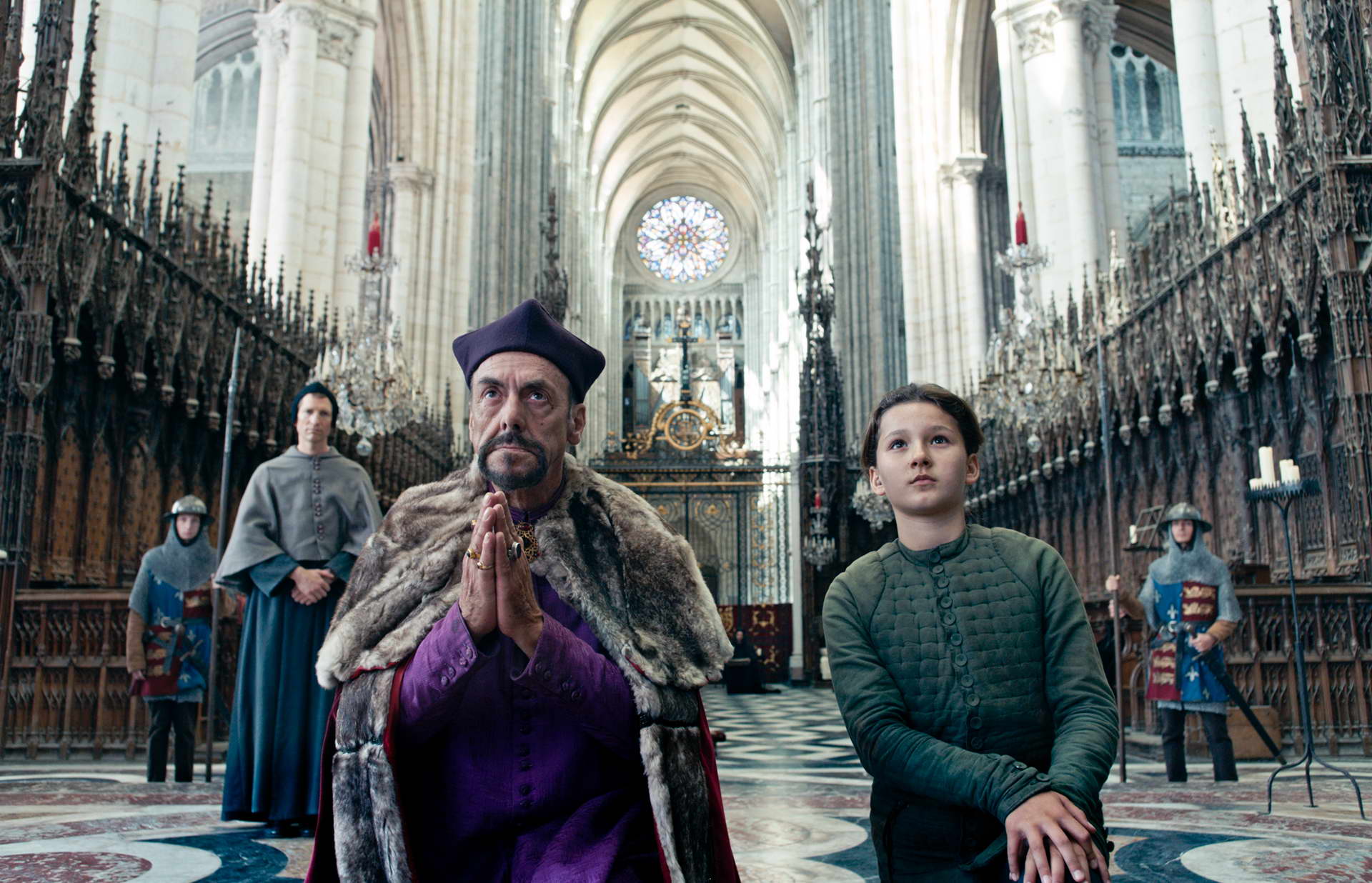 < Change in the program!
For the first time, the annual meeting of the FIPRESCI, the International Federation of Film Critics, is held in Hungary >