2019. September 15. Sunday 07:14
The last day of the first weekend of the Festival offers tons of exciting movies. The competition program continues with an American sci-fi, but the Latin-American film featuring an armed band of teenagers offers some excitement as well.

The program starts at 1 PM in Uránia with the repetition of a CineDocs film. In Chris, the Swiss a young Swiss journalist, Christian Würtemberg, is found dead in mysterious circumstances, in the midst of the Yugoslav Wars. Anja Kofmel, his cousin, was only a little girl at that time. After twenty years she decided to find out what happened with her admired cousin. The film is a story of an exciting journey. In order to reveal the secret of Chris’ death the director mixes animation, archival footage and investigative memos in her film.

At 2 PM, the Pressburger room hosts the repetition of one of the hits of this years’s Cannes Film festival The Lighthouse. A lighthouse on a small, remote island. After a long hike two strange and a bit suspicious men arrive there to serve as its keepers: an experienced old guy (Willem Dafoe) and a young lumberjack turned lighthouse keeper (Robert Pattinson). Their desires, fears, the suggestive environment and the loneliness play tricks on their minds determining their relationship in a rather cathartic way.

At 3 PM in the Uránia room the American film Light From Light is screened. The film started its career at the Sundance Festival. Shelia, a single mom and sometime paranormal investigator, is asked to investigate a possible “haunting” at a widower’s farmhouse in East Tennessee. After failing at investigating on her own, Shelia enlists Owen, her underachieving teenage son, and one of his classmates, a bright girl named Lucy. Together, Shelia, the widower, and the two teens attempt to understand the mystery.

Ferenc Bessenyei, one of the greatest Hungarian actors was born 100 years ago. It is hard even to list two times Kossuth-prize winner Bessenyei’s remarkable films, for he has played in dozens of great movies for more than five decades. CineFest pays tribute to his oeuvre with a roundtable discussion at 4 PM in the Béke room, after which A Hungarian Nabob, an all-time audience favorite by Zoltán Várkonyi is screened at 4:40 PM. Bessenyei is accompanied by legendary actors and actresses like Zoltán Latinovits, Tibor Bitskey, Lajos Básti and Éva Ruttkai in this film.

At 4PM in the Pressburger room starts the first feature competition entry of the day with the Slovenian Half Sisters. The film is a comedy of dramatic depth about two sisters. For years they hated each other but fate introduces a U-turn and they have to live together in an apartment. By the end sisterly love overcomes every conflict. The screening is followed by Q&A with the filmmakers.

The CineDocs category continues at 4 PM in the Zukor room with Liquid Gold by Kossuth-prize holder Tamás Almási. It is the first Hungarian film on wine, introducing us the famous Tokay and the devoted wine-makers of the Tokaj-region. István Szepsy, the descendant of a famous Hungarian wine-making family, András Bacsó the director of Oremus and László Alkonyi, the former journalist who fell in love with wine-making. Three dedicated heroes, one passion: to create The Great Wine that can return to the most refined tables of the world. Would the much-anticipated rain come? Would the fog settle and the sunshine again? Every single moment of making aszú is up to the mercy of nature. Only mad-men engage in such a task or geniuses who are not bound by harsh circumstances. In his documentary, Tamás Almási pays tribute to such geniuses.

At 5 PM in the Uránia a classic by Bille August, Best Intentions is played. After his intended final feature, Fanny and Alexander, the legendary Swedish director, Ingmar Bergman started to write autobiographical books. His first one, ‘The Best Intentions’ was later turned into film by Bille August, with Bergman as the screenwriter. The film is a condensed version of a four-part television mini-series telling the story of Bergman’s parents, their relationship unwanted or even forbidden by their families. The film won a second Palme d’Or for August at the Cannes Film Festival. As a director, Bergman has never won the main prize of one of the most prestigious film festivals of the world and August received it with a film the screenplay of which was written by Bergman. Be sure to watch the film, for there is no repetition!

The (competition) film waited by probably the most is the Prospect starting at 6:15 PM in the Pressburger room. A teenage girl (Sophie Thatcher) and her father (Jay Duplass) travel to a remote alien moon, aiming to strike it rich. They’ve secured a contract to harvest a large deposit of the elusive gems hidden in the depths of the moon’s toxic forest. But there are others roving the wilderness and the job quickly devolves into a fight to survive. Forced to contend not only with the forest’s other ruthless inhabitants but with her own father’s greed-addled judgment, the girl finds she must carve her own path to escape.

Zoltán Várkonyi’s Zoltán Kárpáthy (1966) is the follow up of the ‘A Hungarian Nabob’. Both films are based on Mór Jókai’s novel. This film tells us the story of the nabob’s son, the story of the fight for the fortune of the wealthiest Hungarian nabob. Abellino Kárpáthy has to prove that Zoltán, the nabob’s son is not the legal heir, but the case gets messy. The scene is set in the pre-1848 Hungary, where the reform era dominates with all its ups and downs, romantic heroes and heroines. The film is screened at 6:25 PM in the Béke room, that is immediately after the screening of ’A Hungarian Nabob’. It means that the audience has a chance to watch the two movies in succession.

At 6:30 PM in the Zukor room Léo Major – The One-Eyed Ghost premieres in the CineDocs category. Léo Major was the Québécois Rambo. During a reconnaissance mission on D-Day, he captured a German armored vehicle by himself. Later on, he single-handedly captured 93 German soldiers during the Battle of Scheldt. He has been wounded and ordered back to Canada two times, but he escaped the hospital both times and went back to fight instead. With some help from the Dutch Resistance, Major liberated the town of Zwolle where an avenue is dedicated to him. In the Korean War, he and his 18 men captured and held the enemy (14.000 Chinese soldiers) off throughout the night. The film dedicated to his life is accompanied by its director to the CineFest.

At 8 PM the Béke room, in the framework of the Shanghai International Film Festival presents program The Return (directed by Hailu Qin and Xiaoli Yang) is screened. In 1949, during the Chinese Civil War between the Communists and the Nationalists, a young man JIANG Sheng bids farewell to his family and flees to Taiwan in order to save an officer of the army, LI Yaojun. Now in their sunset years, both LI and JIANG hang out in a “Red Envelope Club” in Taipei’s Ximending, where veterans who abandoned their families in Mainland China listen to young women sing popular songs from their native land and pay them with money in red envelopes. As JIANG becomes gravely ill, he has to reconcile his emotions for one of the “red envelope girls” with his deep longing for his homeland. The actor playing the main character is 95 years old and he says that it is his last film, while the director, Hailu Qin is a popular actress and singer making her directorial debut with this film.

At 8:30 PM in the Zukor room is the repetition of the British feature film, Beats. The film takes us to the world of electronic dance parties of the ‘90s. By 1994 the more conform British society had enough of the so-called illegal rave parties, insomuch as the Criminal Justice and Public Order Act of 1994 outlawed unlicensed gatherings “at which amplified music is played… wholly or predominantly characterized by the emission of a succession of repetitive beats”. It is only the starting point of the movie though. The film presents the triumph of the unlikely friendship of two Scottish teens – told with some grittily effective social realism and humor.

At 9 PM, in the Pressburger, a very exciting movie starts. In Monos on a faraway mountaintop somewhere in Latin America eight kids – Rambo, Smurf, Swede, Bigfoot, Wolf, Lady, Dog and Boom Boom – receive an order. They have to watch over a foreign hostage (Julianne Nicholson) and a conscripted milk cow. Because of the quick change of frontlines their once easy mission turns to a nightmare. Alejandro Landes’ (Porfirio, Cocalero) third feature evokes the time of the Columbian civil war from the teenagers point of view.

At 10:30 PM in the Uránia a really unique film awaits the fans of the CineDocs category. The dynamic, visually stunning, interesting documentary Jill Bilcock: Dancing the Invisible is a real gem for film-lovers and filmmakers as well. Jill Bilcock, the world-famous Australian editor, worked on beloved films such as Romeo+Juliet (1996) Moulin Rouge! (2001), Road to Perdition (2001), Elizabeth (1998) or Elizabeth: The Golden Age (2007). While we can get familiar with the Bilcock’s work, well-known, luminary filmmakers provide unprecedented insights into the trade.

In case we missed it yesterday, at 11PM The Souvenir plays in the Pressburger room. Julie is studying directing when she meets and falls in love with a drug-addict. The film shows the hardships of someone living with an addict. The psychological drama featuring Tilda Swinton and her daughter, Honor Swinton Byrne presents our deepest emotions with the power of pictures.

The Open Eye program offers Ghost Town Anthology by the Canadian director Denis Côté at midnight in the Béke room. In a rural Quebecois community with a population of just 215 people, young Simon Dubé dies in a car accident. The shocked townspeople are reluctant to discuss the circumstances of the tragedy and the mayor insists that the inhabitants are capable of dealing with this tragedy on their own. And, indeed, they are trying, but the arrival of strangely silent outsiders commands their attention. Who are they? What is happening? The film premiered at the Berlinale. 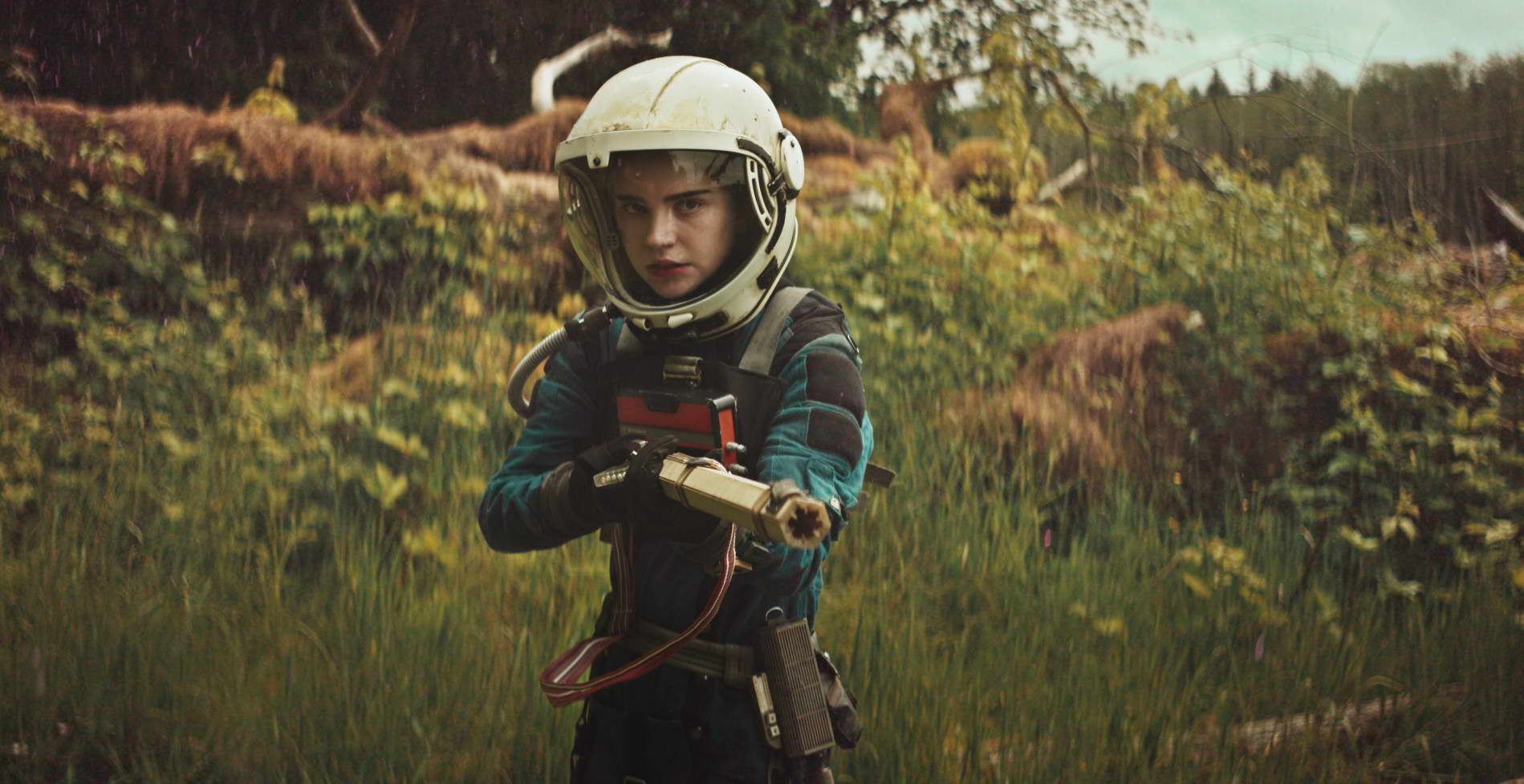