New program for the fans of outdoor adventures

New program for the fans of outdoor adventures

On the 13th of September in the Szinva-terasz amphitheatre the audience have the chance to watch a selection of the famous Reel Rock festival. Reel Rock 13 brings us a brand new collection of the year’s best climbing films taking us from the climbing gyms to Antarctica.

‘Age of Ondra’ is the story of the 25-year-old Czech crusher. Last year he established a benchmark for the sport; a 5.15d in Norway he dubbed “Silence”. We follow Adam from his home in the Czech Republic, across Europe to North America on his journey to be the first person to send 5.15 on the first try.

When climbing was announced as part of the 2020 Olympics, it was a monumental occasion for the sport. But many climbers were shocked to learn that one of the three combined events required to compete for a medal is…speed climbing. Reel Rock correspondent Zachary Barr looks into this little-known as seldom practiced sub-discipline of the sport.

In ‘Queen Maud Land’ a dream team of six elite climbers mount an expedition to one of the world’s last great climbing frontiers: the remote frozen towers of Antarctica. Jimmy Chin and Condrad Anker tackle a new route on the 1,100 meters Ulventanna, Savannah Cummins and Anna Pfaff summit the towering Holtanna; Alex Honnold and Cedar Wright make a harrowing and hilarious blitz of 13 different spires spread across the ice field. Queen Maud Land showcases a stunning, rarely visited wilderness, and the suffering and vision needed to climb at the bottom of the world.

Wadi Rum, known as the Valley of the Moon is a vast landscape of sandstone walls in the desert of Jordan. Hoping to lure international climbers, two Israelis team up with a local Bedouin guide to establish a 550 meters route, eventually recruiting American climber Madaleine Sorkin to help achieve their dream. Valley of the Moon explores the importance of climbing as a way to cross cultural barriers, build friendship and chase adventure in one of the most breathtaking regions on earth.

Following the film of Reel Rock 13 we pay tribute to David Lama with the screening of ‘A New Perspective’. The film follows the soft-spoken climber and his partner, Peter Ortner, as they attempt to free climb Eternal Flame, a pitch up the Nameless Tower in the lofty Karakorum Range.

On the 14th of September the program starts at 8:30 PM with the “Samans in the trap of modern civilization” made by a well-known local couple.

The Mentawai Islands are a chain of islands and islets near the western coast of Sumatra. It is a noted destination for surfing, but in the heart of the swampy jungle of the northernmost island, Siberut shamans are still talking to the trees. The film allows us to peek into the culture of the clans living here – probably grabbing some of the last moments of this ancient civilization.

At 8 PM the program continues with the screening of The Dawn Wall. In 2015, American rock climbers Tommy Caldwell and Kevin Jorgeson captivated the world with their effort to climb The Dawn Wall, a seemingly impossible 910 meters rock face in Yosemite National Park, California. Blurring the line between dedication and obsession, Caldwell and Jorgeson spend six year meticulously plotting and practicing their route. On their last attempt the whole world is watching. The film is about the 19 days of sending a route, believed to be impossible. It matches everything we expect from the probably best outdoor filmmakers of the world working on one of the most beautiful granite walls of the earth.

The program continues on the 20th of September in the Uránia screening room with the Hungarian gem ‘Inverse Everest’. The 2197 meters deep Krubera-Voronya cave is the underground Everest, the second-deepest-known caves on Earth. The Hungarian expedition reached the Game Over world’s deepest point reachable without diving equipments: the Game Over chamber. The film follows the journey of the Hungarian expedition and brings us breathtaking pictures. The screening is followed by Q&A with the cavers from the film (Péter Adamkó, Gergyel Ambrus, Attila Jager, Attilag Tóth). Moderator: Zoltán Füredi, cultural anthropologist, filmmaker, caver.

At 9 PM we return to the walls of the Yosemite-valley. The Oscar-winning documentary ‘Free Solo’ by Elizabeth Chai Vasarhelyi and Jimmy Chin finally makes it to the big screen at the CineFest. Alex Honnold is one of the world’s best athletes by far. Honnold’s climb pictured in the film set the ultimate standard: perfection or death. Free Solo is both an edge-of-your seat thriller and an inspiring portrait of an athlete who exceeded our current understanding of human physical and mental potential. 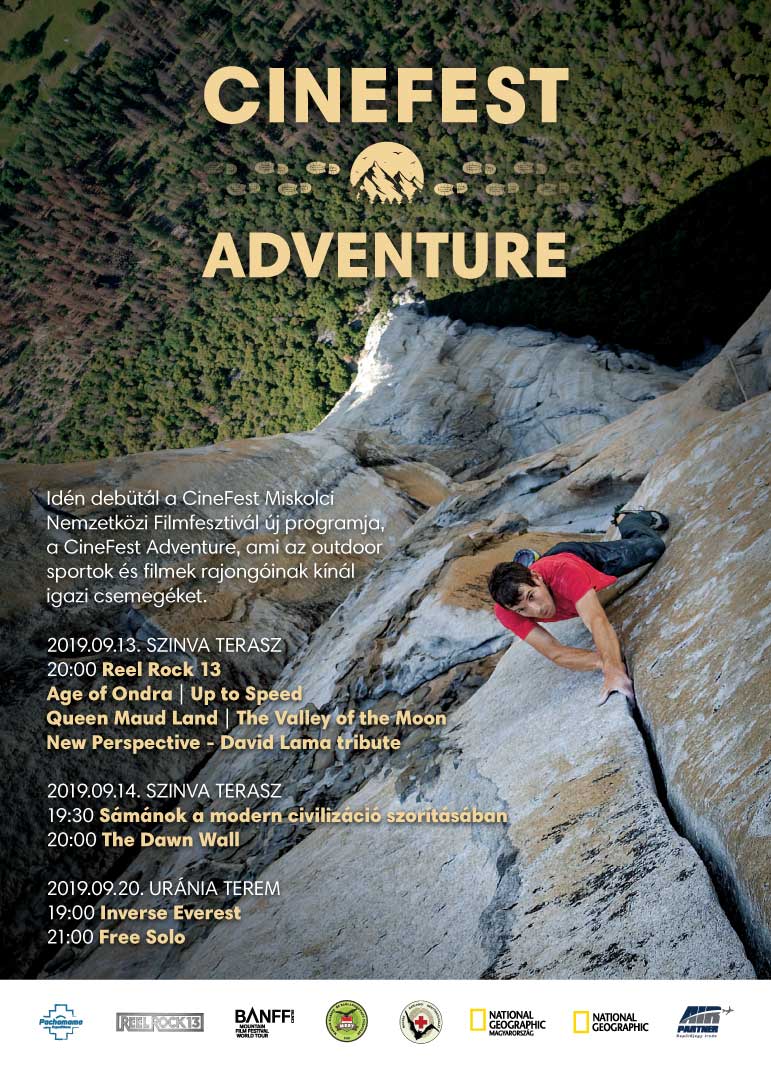