A COOPERATION AGREEMENT BETWEEN THE ORGANIZERS OF THE CINEFEST, THE UNIVERSITY OF MISKOLC AND THE CITY OF MISKOLC HAS BEEN SIGNED

A COOPERATION AGREEMENT BETWEEN THE ORGANIZERS OF THE CINEFEST, THE UNIVERSITY OF MISKOLC AND THE CITY OF MISKOLC HAS BEEN SIGNED

2021. June 25. Friday 19:11
Pál Veres, the mayor of Miskolc, Zita Horváth, the rector of the University of Miskolc, and Tibor Bíró, festival director and managing director of the Cinemis Ltd. signed a cooperation agreement that strengthens the ties between the parties at the press conference on last Friday. All parties agreed that the international festival is one of the region’s cultural values to be protected and preserved.

“We all hope that the pandemic has really come to an end and that the world will open up permanently. There has been a big shortage of events and festivals in Miskolc last year and CineFest has been one of the events that were cancelled,” – said Pál Veres. “If nothing terrible happens, we will organize this important program from 1 to 18 September.”

The Mayor also talked about the role of the university

Even if it is not possible to bring the university physically closer to the inner city, we would like to establish stronger ties in the field of scientific, public and cultural events. The aim of the municipality is to keep young people in the city, a goal that cannot be achieved without them loving Miskolc.

The agreement does not contain specific details in programs and events, but provides an opportunity for common thinking and planning.

„We do our best to ensure that, after a year of absence, the usual atmosphere returns to the city,” – said Tibor Bíró. “This is a framework agreement, nothing is set in stone, but I think the University and the Festival will have joint programs this year.”

For years, the University has been connected to the “Our Home: Miskolc” program, where entries from and about the city are presented every year. Students from the University of Miskolc make films for this program and also lecturers of the University take part in the jury.

As part of the program we also have a scholarship offered to a selected student of the University of Miskolc to make his/her film for the next edition of the Festival. Last year we had to cancel this program as well, but this year, as the agreement also points put, the scholarship program will continue. In addition, the “Roma Picture” program is also a part of the Festival. This special program focuses on Roma people behind and in front of the camera. The University helps us in organizing this program as well.

City within the city

The CineFest is organized for the 17th times this year. Besides organizing the Festival, the CineMis Ltd. aims to promote film culture – among young people as well. This is also the aim of the University of Miskolc. 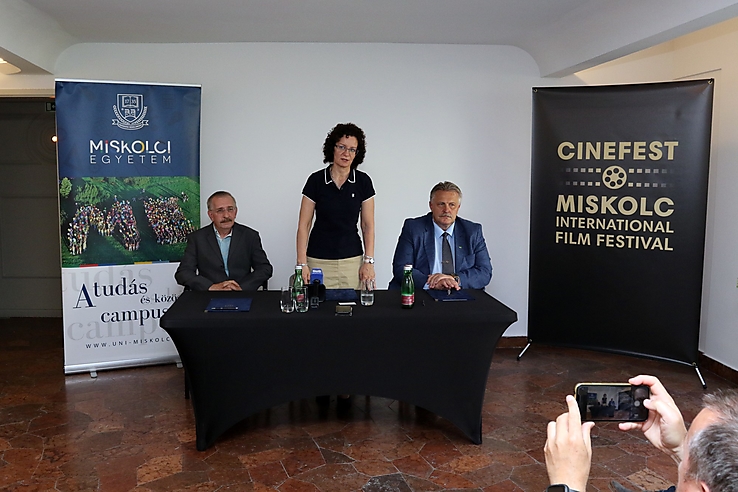 < THE FIRST FILM IN THE FEATURE COMPETITION PROGRAM IS ANOUNCED!
The feature film competition program of this year’s CineFest is taking shape! As a start, here is a multiple-award winning film: >