2019. September 16. Monday 07:30
Even though a new week starts, Monday seems to be just as great in terms of the programs as any day of the weekend. The German entry in the competition program of the CineFest for example is one that has won Silver Bear at the Berlinale.

In the Béke room at 3 PM a repetition from the CineDocs competition program opens the day. Ticket to the Moon takes us back to 1959. At the frenzy of the Space Race almost 100.000 people on both sides of the Iron Curtain signed up to fly to the Moon at the Pan Am‘s First Moon Flights Club Today, we know exactly what the Moon looks like, yet we are still dreaming about space, setting off for various missions – Moon, Mars and further on. Are the “Moon” generation’s dreams and aspirations the same as ours today?

At 4 PM in the Pressburger room the repetition of Prospect starts. A teenage girl (Sophie Thatcher) and her father (Jay Duplass) travel to a remote alien moon, aiming to strike it rich. They’ve secured a contract to harvest a large deposit of the elusive gems hidden in the depths of the moon’s toxic forest. But there are others roving the wilderness and the job quickly devolves into a fight to survive. Forced to contend not only with the forest’s other ruthless inhabitants but with her own father’s greed-addled judgment, the girl finds she must carve her own path to escape.

At 4PM in the Zukor room the repetition of the Slovenian Half Sisters starts. It is a comedy of dramatic depth about two sisters. For years they hated each other but fate introduces a U-turn and they have to live together in an apartment. By the end sisterly love overcomes every conflict.

At 4PM the Uránia room hosts the repetition of a CineDocs film. In Chris, the Swiss a young Swiss journalist, Christian Würtemberg, is found dead in mysterious circumstances, in the midst of the Yugoslav Wars. Anja Kofmel, his cousin, was only a little girl at that time. After twenty years she decided to find out what happened with her admired cousin. The film is a story of an exciting journey. In order to reveal the secret of Chris’ death the director mixes animation, archival footage and investigative memos in her film.

Ferenc Bessenyei, one of the greatest Hungarian actors was born 100 years ago. It is hard even to list two times Kossuth-prize winner Bessenyei’s remarkable films, for he has played in dozens of great movies for more than five decades. CineFest pays tribute to his oeuvre with a rarely broadcasted film of his today. The Bitter Truth premiered and banned in 1957, is screened at 5 PM in the Béke room. In this movie Bessenyei performs alongside the legendary Miklós Gábor, also born 100 years ago.

Az 6 PM in the Uránia room the repetition of Léo Major – The One-Eyed Ghost from the CineDocs category starts. Léo Major was the Québécois Rambo. During a reconnaissance mission on D-Day, he captured a German armored vehicle by himself. Later on, he single-handedly captured 93 German soldiers during the Battle of Scheldt. He has been wounded and ordered back to Canada two times, but he escaped the hospital both times and went back to fight instead. With some help from the Dutch Resistance, Major liberated the town of Zwolle where an avenue is dedicated to him. In the Korean War, he and his 18 men captured Hil 355 and held the enemy (14.000 Chinese soldiers) off throughout the night.

At 6:15 PM the first film from the competition program starts in the Pressburger room. System Crasher is the heartbreaking story of Benni, a nine-year-old girl. The wild, love-hungry girl is what child protection services call a ‘system crasher’. Despite every effort of the system and its experts, she is expelled from everywhere due to her disturbing behavior. She is considered dangerous on her environment and herself as well. Benni has one single goal: she wants to go home to her mommy who forsook her. The film that has been awarded at the Berlin International Film festival could be a true story: it talks about children who, despite all efforts, do not fit into the system. Helena Zengel’s thrilling and mature film will stay with us for a long time.

As part of the CineDocs program at 6:30 PM in the Zukor room starts the Hi, A.I. –Love Stories from the Future. Isa Willinger’s film introduces us to the world of humanoid robots and A.I. in a masterfully composed and humorous way. While Chuck starts his romantic journey with his newly assembled robot partner, Harmony, in the U.S., in Tokyo grandma Sakurai gets a cute robot grandchild named Pepper from her son. Although our main characters are separated by a world, their goal is similar: they want company. After several international film festivals (e.g. HotDOCS, Sheffield Doc Fest), in Hungary, the audience of the CineFest will be the first to marvel at the life-changing role artificial intelligence can play in our lives.

CineFest Miskolc International Film Festival organizes its Roma Picture program for the 14th time this year. The program is run by the Department of Cultural and Visual Anthropology. Marton Vörös, a 17-year-old national champion boxer was diagnosed with leukaemia in 2016. A couple of months after his one-year treatment, he relapsed. The solution came in the form of bone marrow transplant, with his younger brother, also a boxer, as the donor. However, the treatment meant that Marton’s career in sports was officially over. Csaba Dallos’ Exchanging Punches steps into the story at this point. The question is not about comeback anymore but fitting something of our forsaken dreams into our everyday lives.

At 8 PM, the Uránia hosts the Fourth block of the Short Feature Competition Program, with two Spanish, one French-Brazil, a Belgian, a British and a Dutch film.

At 8 PM in the Béke room the repetition of the British feature film, Beats starts. The film takes us to the world of electronic dance parties of the ‘90s. By 1994 the more conform British society had enough of the so-called illegal rave parties, insomuch as the Criminal Justice and Public Order Act of 1994 outlawed unlicensed gatherings “at which amplified music is played…wholly or predominantly characterized by the emission of a succession of repetitive beats”. It is only the starting point of the movie though. The film presents the triumph of the unlikely friendship of two Scottish teens – told with some grittily effective social realism and humor.

At 8:30 PM in the Zukor room Diamantino is screened. The film premiered in Cannes and broadcasted as part of the Open Eye program. The soccer star and former Portuguese national hero, Diamantino loses his special touch and ends his career in disgrace. In reaction to a devastating World Cup loss he adopts a Mozambican refugee who claims to be a teen boy but is actually an undercover agent of the Portuguese government investigating the money-laundering operation run by the athletes evil twin sisters. There is also a mad scientist trying to clone Diamantino in order to create an invincible super team. And there are some giant fluffy dogs as well. Prepare yourself for one of the craziest political satire of the year!

At 9 PM in the Pressburger room Tehran: City of Love premieres. Mosaics from Tehran where everyone wants to find happiness. The receptionist fighting against kilos, the former bodybuilder and the accidental wedding musician share the same goal. They want to find The One. A great Iranian tragicomedy with an exceptional cast and witty humor.

At 9:15 PM, the Uránia room hosts the repetition of one of the hits of this years’s Cannes Film festival The Lighthouse. A lighthouse on a small, remote island. After a long hike two strange and a bit suspicious men arrive there to serve as its keepers: an experienced old guy (Willem Dafoe) and a young lumberjack turned lighthouse keeper (Robert Pattinson). Their desires, fears, the suggestive environment and the loneliness play tricks on their minds determining their relationship in a rather cathartic way.

At 10 PM short features are in focus in the Béke room. The repetition of the Third block of the Short Feature Competition Program, with Swiss, Italian, Dutch, Argentine, Russian, British and Belorussian films is showed.

At 11 PM, in the Pressburger, a very exciting movie starts. In Monos on a faraway mountaintop somewhere in Latin America eight kids – Rambo, Smurf, Swede, Bigfoot, Wolf, Lady, Dog and Boom Boom – receive an order. They have to watch over a foreign hostage (Julianne Nicholson) and a conscripted milk cow. Because of the quick change of frontlines their once easy mission turns to a nightmare. Alejandro Landes’ (Porfirio, Cocalero) third feature evokes the time of the Columbian civil war from the teenagers point of view.

At 11:30 PM in the Uránia a really unique film awaits the fans of the CineDocs category. The dynamic, visually stunning, interesting documentary Jill Bilcock: Dancing the Invisible is a real gem for film-lovers and filmmakers as well. Jill Bilcock, the world-famous Australian editor, worked on beloved films such as Romeo+Juliet (1996) Moulin Rouge! (2001), Road to Perdition (2001), Elizabeth (1998) or Elizabeth: The Golden Age (2007). While we can get familiar with the Bilcock’s work, well-known, luminary filmmakers provide unprecedented insights into the trade. 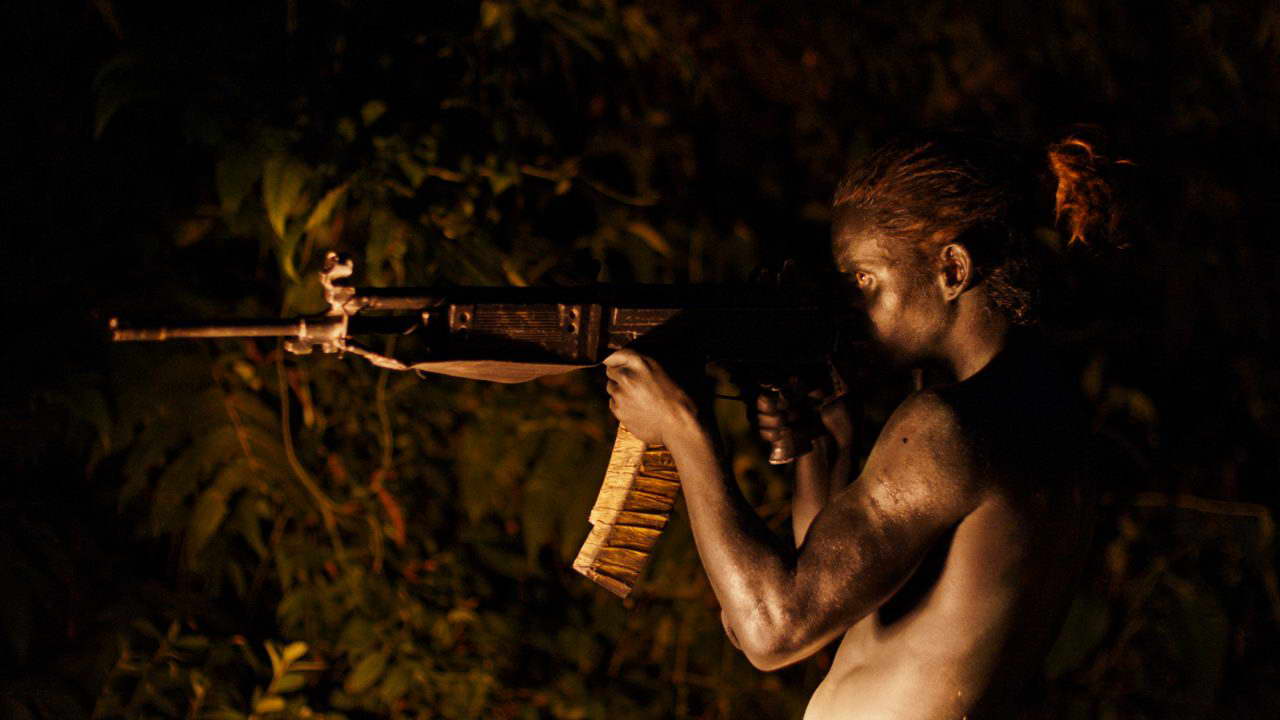